Happy Wednesday! It’s time for another edition of Shelf Control hosted by Lisa at Bookshelf Fantasies about current unread books on your bookshelf. This week the book I’m choosing to highlight on my shelf is Julia Vanishes by Catherine Egan. 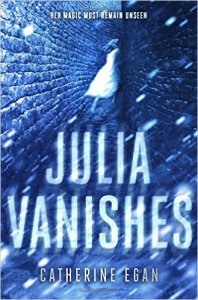 Julia has the unusual ability to be . . . unseen. Not invisible, exactly. Just beyond most people’s senses.

It’s a dangerous trait in a city that has banned all forms of magic and drowns witches in public Cleansings. But it’s a useful trait for a thief and a spy. And Julia has learned–crime pays.

Her latest job is paying very well indeed. Julia is posing as a housemaid in the grand house of Mrs. Och, where an odd assortment of characters live and work: A disgraced professor who sends her to fetch parcels containing bullets, spiders, and poison. An aristocratic houseguest who is locked in the basement each night. And a mysterious young woman who is clearly in hiding–though from what or whom?

Worse, Julia suspects that there’s a connection between these people and the killer leaving a trail of bodies across the frozen city.

The more she learns, the more she wants to be done with this unnatural job. To go back to the safety of her friends and fellow thieves. But Julia is entangled in a struggle between forces more powerful than she’d ever imagined. Escape will come at a terrible price.

Book sale! There’s a children’s literature reviewer near my house. They have a book sale every couple of months selling books publishers give them for very cheap. I love acquiring books that way.

I’ve heard a lot of buzz around the book community about this book. I don’t know a whole lot about it, but in general I’m into reading YA books.

I don’t know when I’m going to get to this. Maybe in the summer?